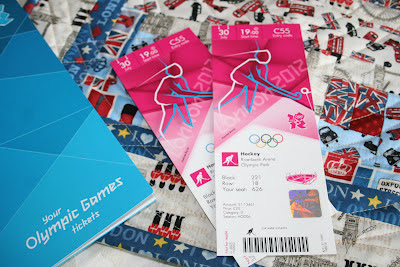 Its a busy weekend for Quilty Doings as I head south to family, friends and the Olympic Games. Reception to London hosting the Games has been somewhat mixed North of the Watford Gap ( which is only just North of London for all my non UK friends and readers) and I have found this a bit sad. We in the UK are not very good at showing our patriotism but this occasion surely must be an opportunity for us to celebrate and even show off a bit?  Perhaps its that old self deprecation thing with us here in Blighty, in that we don't like to be seen to do anything too well - who knows. Anyway this small English woman will be waving her flag with the best of them both at home and down in the Olympic Park itself.
To get in the mood on Friday we headed out to Princes Street Gardens to watch the Red Arrows fly over Edinburgh Castle, as part of the all day opening celebrations and as ever they were spectacular. Don't worry, the sky in the photo is very misleading as it was a lovely sunny lunch time rather than the end of the world as it appears here.
Me and the beloved JB will be meeting up with Number One Son on Monday and heading for what they have called the Copperbox to watch a spot of Handball, followed by a couple of games of Hockey.  The first of these will be a hoot as I have no idea what handball actually is and even had to enquire whether it have goals or a net to a knowledgeable sporting colleague on Friday before I left the office. However Number One Son struck it lucky as it turns out, discovering it is the national sport of Croatia. He was   was told this in a  proud and happy voice by his Croatian boss on the same day, so he has the inside track on rules, regulations and who will be the ones watch. I think we are watching team GB, Russia, Spain and France so my hopes for  a British victory are slim.

When it comes to hockey this is a different matter all together. Many hours of torture where endured in my youth on a school hockey pitch, so the rules are ingrained on my memory. I think for women of a certain age hockey will always conjure up memories of frozen playing fields, giant Airtex Navy knickers and games mistresses with more facial hair than Fidel Castro. I have one particularly vivid memory of an incident when  after a term and a half of proving that I was absolutely rubbish at the game, Mrs Barefoot ( no trust me that is not a made up name, she was head of the P.E department) decided she would make me play in goal. Now what ever possessed her to place a very diminutive 14 year old girl with child sized feet in goal I still to this day have not figured out, but that she did.
Luckily for me, the opposition turned out to be even more rubbish than me , so our team spent the whole of the game in the opposition's half. I was left alone in my little goal mouth, stick in one hand, singing Judy Collins' "Send in the Clowns" to myself ( heaven knows why singing to myself or why that particular song) whilst desperately trying to cling on the giant pads with the other hand. The pads and foot protectors were so huge that  they hung off me with the pads so gigantic they reached above my waist, making any kind of movement almost impossible. Who knows what would have happened if the opposition had deemed to make an attack on goal. I think my only tactic would have been to physically launch myself head first at the attacker and hope to shock her into missing the ball altogether! Needless to say I would never have made Team GB or achieved any sporting prowess, but that doesn't mean I cannot appreciate a good bit of rough and tumble when it comes to a well honed muscular man running around a pitch.

Anyway I digress. Hockey it is on Monday night. Team GB versus Argentina, which will be interesting to say the least. Our national rivalries are more than well known so an "interesting" confrontation may ensue. Let the best men win, that's all I can say ( and I know who they are....).
As you may have guessed all this sporting excellence means there will be no stitching this weekend. Well almost none. To while away the hours on the East Coast line I have bought a small patriotic table mat with me that I am going to give me my best mate and host, which I knocked up this morning in a rush of patriotic fever. The binding needs finishing off but with a 5 hour train journey I really don't need to rush. Just hope for a sympathetic neighbouring passenger who doesn't mind the odd thread being tossed their way. The London prints were a must  when I saw them, with the taxis, guardsmen, phone boxes and the like and so I hope she likes it. Just a little bit of fun really. To be honest I only went in the shop to by a long quarter for a binding on another project but came out with this little bagful but you know what its like, don't you. 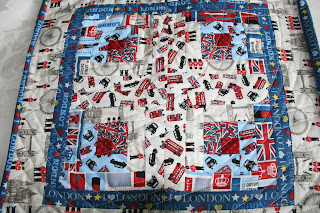 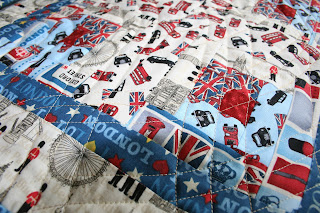 Actually I have hidden in my bag a real gift for her, but that is for my next post as if she reads this it will not be a surprise!
See you again soon.
Posted by Emily's Mum at Saturday, July 28, 2012

Thanks so much for taking the time to comment. It is really appreciated. I will always try to respond to most comments, especially where a question is asked, so please check your settings are not set to no-reply! 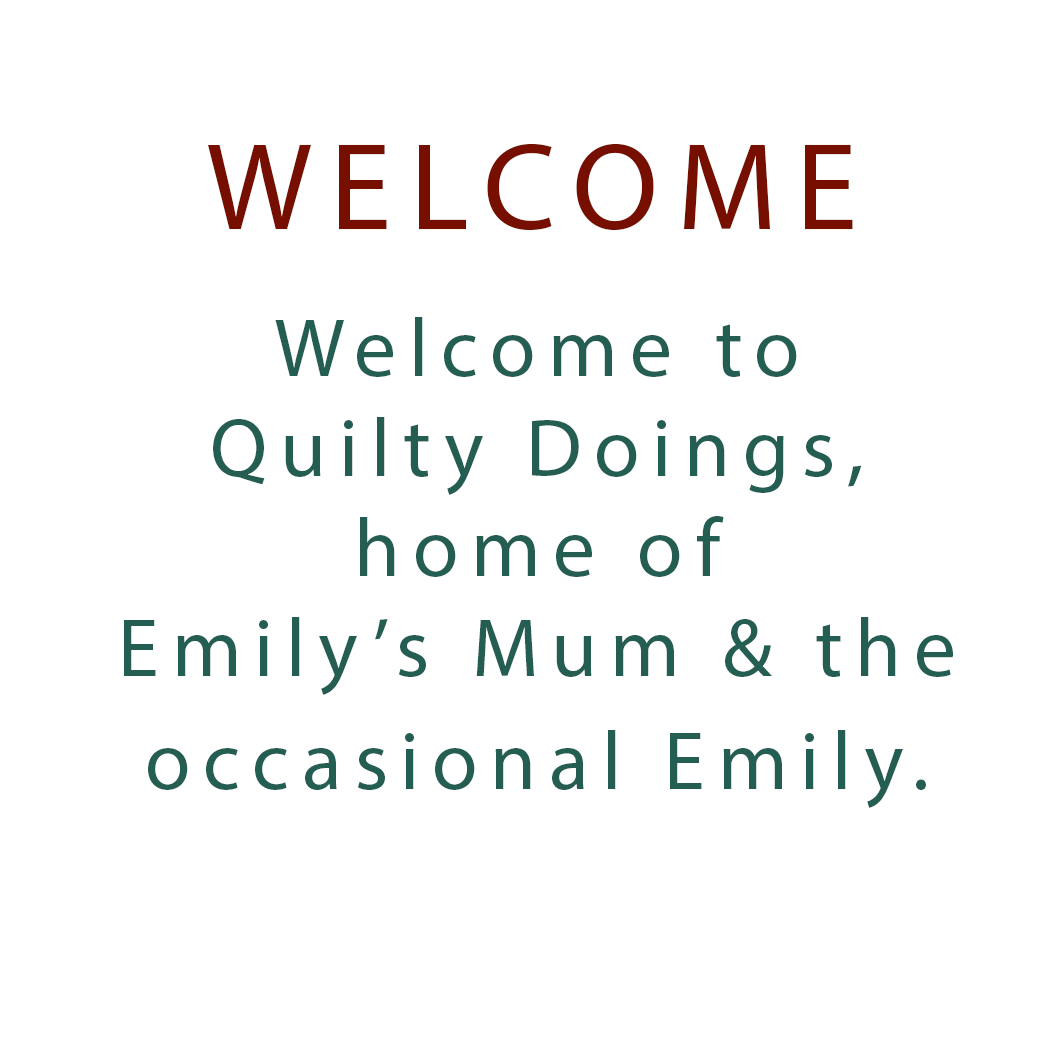 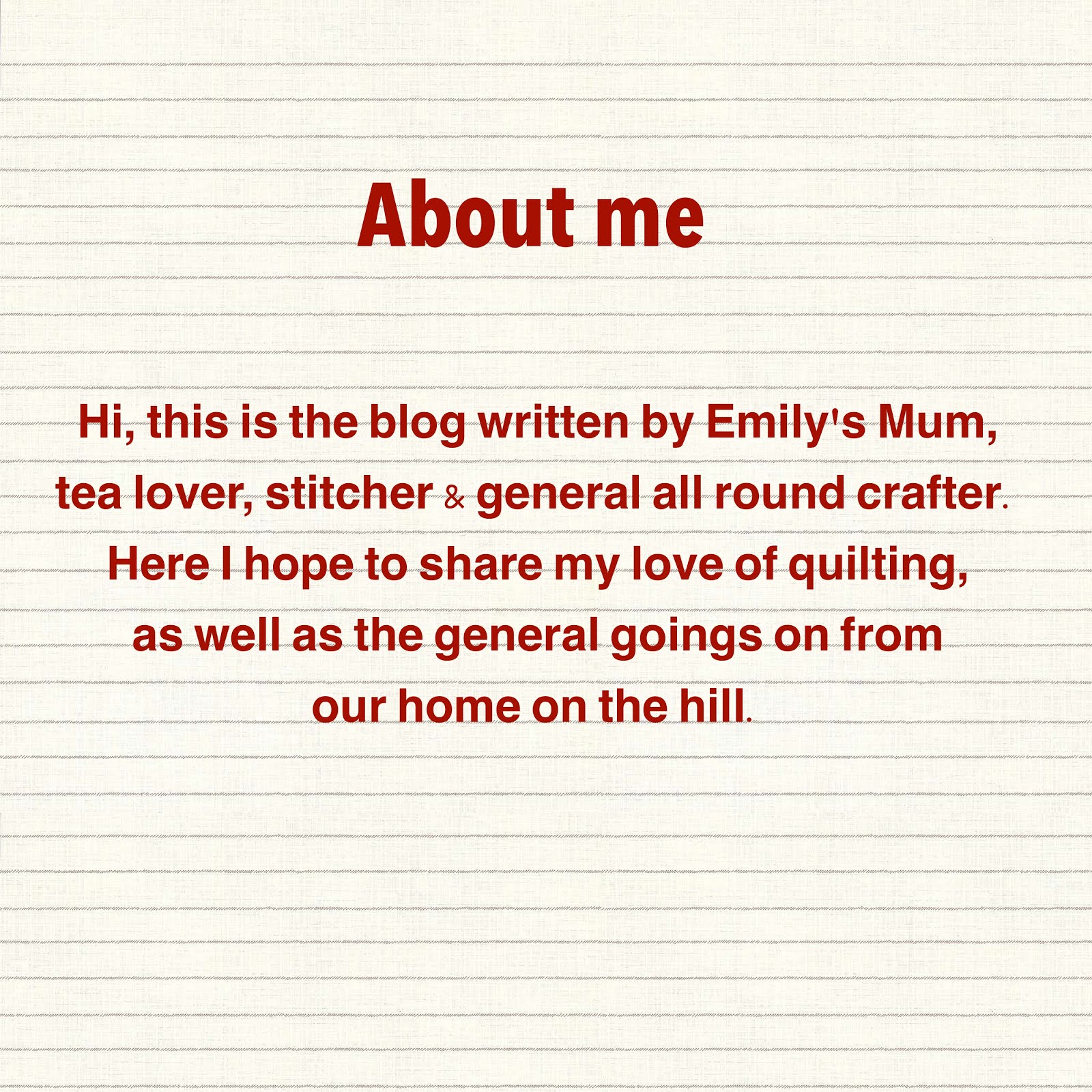